Grizzly Supplies/SAP manufactures face seals for OEM and OES or Tier1 replacement face seals of the highest quality. At Grizzly Supplies, we provide mechanical face seals for all types of equipment and applications. Our face seals are rigorously tested and inspected with the strictest specifications in mind to guarantee that our customers are getting one of the best heavy-duty seals on the market.

Specifically designed for heavy duty, rotating applications, Grizzly Supplies floating seals are made with specialized cast or forged iron to withstand extreme wear and tear. So, if you are looking for a face seal that is going to work just as hard as you do and that will keep your equipment running longer and more efficiently, Grizzly Seals is the sealing specialists for you!

SAP Parts is a Grizzly Supplies joint venture company. This means, when you purchase from us, you are purchasing from the manufacturer.

Contact us today to speak to a sealing expert!

All About Mechanical Face Seals

Face seals—or Duo Cones®—were originally invented by Caterpillar Tractor Company to seal against the harsh environments that their heavy equipment was exposed to. They are a combination seal that is made out of both metal seals and a toric loader that is a soft rubber or elastomer-based ring. The Duo Cone® or face seal function is primarily used to protect against leakage and contaminants from entering or leaving rotating elements (such as axles, wet brakes, drive motors etc.) from a mixture of internal and external environmental factors. This means that these mechanical face seals will protect the vital components of your equipment from foreign materials as they rotate.

What else can face seals be called?

What sizes do floating seals come in?

Unlike traditional mechanical seals, heavy-duty seals can come in larger sizes. For example, at Grizzly Supplies, face seals are available in sizes up to 1300 mm (that’s over 51 inches!). SAP face seals can also come in sizes as small as 50 mm (just under 2 inches).

Both styles of seals are comprised of two metal seals that sit against each other (which is why they are also referred to as “floating” seals) with a wedged gap that allows for easy lubrication. Only one half of the duo cone seal rotates, while the other half remains static. By combining these two halves, you have a leak proof seal designed to withstand the most severe and challenging environments!

What types of materials are SAP face seals made from?

Mechanical face seals can be made with the following materials: Steel (100Cr6) or Cast Alloy (high chrome-moly or Ni-hard) and elastomer (NBR, NBR-LT, HNBR, Silicone, FKM).

The heavy-duty nature of a face seal is essential because, most often, mechanical face seals are found in equipment that requires maintenance-free sealing for long periods of time. This is why it is important to make certain you choose the perfect mechanical face seal for your particular equipment type and application! You want your heavy-duty seal working with you and your environment. Face seals can most commonly be used in the following industries:

What kinds of applications are face seals used for?

Floating seals are used in many different kinds of heavy-duty environments. They can be found in the following components:

SAP is dedicated to producing innovative products, which means that every heavy-duty seal sold by Grizzly Supplies, as the exclusive North American supplier for SAP, is guaranteed to be of the highest quality.

SAP Parts designs, manufactures, and supplies floating seals – or mechanical face seals – for all machine types, such as equipment working in the mining, construction, or agriculture sectors. As an ISO 9001 certified manufacturer, SAP’s face seals adhere to the highest performance standards on the market. ISO 9001 is a quality management certification based on factors that include a high focus on customers and a dedication to continuous improvement. It is a quality management system to help certify that customers are consistently receiving high-quality service every time. 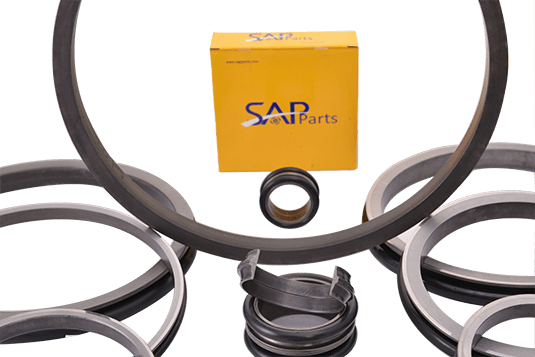 Why Choose Grizzly Supplies for All Your Replacement Face Seals?

Your Downtime is Our Downtime
At Grizzly Supplies, we pride ourselves on providing top-of-the-line products and services for our customers. When your machine goes down, we understand the necessity of getting it back up and running as soon as possible. That is why our sealing specialist will work with you to find the perfect mechanical face seal for your particular type of equipment. Don’t have a part number? That’s not a problem! With our detailed reference guides, we can help you find exactly what you are looking for in no time at all.

Grizzly Supplies is also pleased to offer next-day shipping on standard orders within North America. That’s why you are guaranteed fast and efficient service because our goal is to get your heavy-duty seals to you as quickly as possible!

Need A Custom Mechanical Face Seal?
If we don’t have what you are looking for in stock, we are happy to work with you to find the perfect metal face seal for you! At Grizzly Supplies, we have in-house design and engineering services that specialize in making custom machined seals. So, if you are finding it hard to find a rare part or duo cone seal, we can create one for you to your exact specifications. Please reach out to one of our sealing specialists today to learn more.

Due to the nature of floating seals (their application), they have a long service life. They are designed to withstand tough environments! This also means that they are cost-effective and involve low maintenance (as long as you maintain a proper lubrication schedule). Furthermore, because they are “floating,” face seals are also helpful for reducing vibration in the equipment along with misalignment.

Do I need to lubricate my face seals often? Expand

Yes. Mechanical face seals should be lubricated often. It is necessary to maintain a thin lubricated film between the sliding faces of your face seal. This way it will reduce any friction between your floating seal and other components. It will also keep the temperature levels in your seal housing lower. Looking for more information on lubricants?

How do I install a face seal? Expand

When installing a mechanical face seal, it is important to make certain that your working and installation area is free from any contaminants. Contaminants include dirt, dust, grease, or metal chips. It is also good protocol to wear gloves when handling the seals and use the appropriate installation tools when fitting your face seal into its housing. In order to guarantee a proper seal, you want to make certain that the seal has not been place evenly within its housing. For more information, please read our blog post: Are Your Seals Failing? Top 3 Causes and Easy Solutions.

What's The Best Sealing Solution For You?

Our team is here to help you find the perfect fit for all your sealing needs.